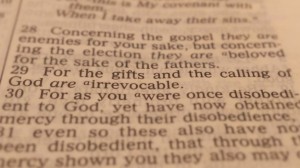 This is the conclusion of our study of Paul’s answer to the question: How can we trust God’s promises to us, when Israel seems to be rejecting the gospel? Did God’s promise to them fail?

In Part 5, we saw the ultimate reason why God has not broken His promise to Israel: they will be restored. God caused them to stumble so that Gentiles can have unprecedented access to The Promise. God made a promise to Abraham that all the nations would be blessed in him, and that is fulfilled because they too can be saved by Christ. Gentiles benefit from Israel’s promise, and do so in large part because of Israel’s blindness to their own Messiah. Israel’s stumble is not for their ultimate doom, however. Some future day, Jesus the deliverer will take away their sin and restore them on a national scale.

The Gifts and Calling of God Are Irrevocable

11:28 Concerning the gospel they are enemies for your sake, but concerning the election they are beloved for the sake of the fathers.
11:29 For the gifts and the calling of God are irrevocable.
11:30 For as you were once disobedient to God, yet have now obtained mercy through their disobedience,
11:31 even so these also have now been disobedient, that through the mercy shown you they also may obtain mercy.

In 9:30-33 we saw the moral reason why God set aside the nation of Israel as a whole. Now we have seen the “divine plan” reason why. So why has God caused or allowed them to be blind to their Messiah? Concerning the gospel, Israel are enemies –they are temporarily outside of God’s program in regards to the gospel. For your sake – they have been set aside as a nation so that the gospel can go out to the Gentiles, and for the first time since Moses, Gentiles can be saved as Gentiles. But concerning election, they are beloved for the sake of the fathers – they are loved (and will yet be restored) because they are the elect nation by God’s promise to the patriarchs. The gifts, the election of God, His promises, are irrevocable (recall 9:4-5).

This is the ultimate lesson of these three chapters: the gifts and the calling of God are irrevocable. God keeps His promises. He will keep His promises to every believer laid out in Romans chapter 8. The proof of this, despite Israel’s present condition (chapter 9), is that there is still a remnant (chapter 10), and they will be restored (chapter 11).

11:32 For God has committed them all to disobedience, that He might have mercy on all.

Ultimately, God wanted Israel to bless all the Gentiles, but they were disobedient in unbelief. So, knowing all things, God used their disobedience to show mercy on the disobedient Gentiles, so that Israel would be jealous, repent, and be restored; finally bringing even greater blessing to the whole world through their obedience. That’s why Paul could marvel, “God has committed them all to disobedience, that he might have mercy on all.” MacDonald explains this verse well:

“Having found both Jews and Gentiles disobedient, God is pictured as imprisoning them both in that condition, so that there would be no way out for them except on His terms.”1

11:33 Oh, the depth of the riches both of the wisdom and knowledge of God! How unsearchable are His judgments and His ways past finding out!
11:34 “For who has known the mind of the Lord? Or who has become His counselor?”
11:35 “Or who has first given to Him And it shall be repaid to him?”
11:36 For of Him and through Him and to Him are all things, to whom be glory forever. Amen.

The ultimate purpose of God in history is to glorify Himself. A part of that purpose is the redemption of all mankind, and He has so worked in history that even the disobedience of all nations, including Israel, will ultimately accomplish His purpose – that He might have mercy on all. Marvelously, the rebellious free will of all mankind will ultimately accomplish God’s sovereign will. He has caused all these things, specifically the fall and redemption of Israel, in a way that ultimately brings Him glory.

This amazing section of scripture is concluded by a doxology. Really, this is the conclusion to the whole book of Romans up to this point. Remember, the burden of Paul is to preach the gospel to both Jews and Gentiles (to promote unity), because the gospel reveals the righteousness of God (Romans 1:16-17). Paul showed in the climax of chapter 3 how God can remain righteous while granting mercy to sinners. Similarly, Paul vindicates God in these three chapters by answering the question, “how has God kept His promise to Israel?” Gloriously, Jesus is the answer throughout. How can God be just and the justifier of sinners? Because of Jesus and His sacrifice. How has God justly caused Israel to stumble? By placing Jesus, the stumbling stone, in their midst. How will God restore Israel? Jesus the deliverer will come out of Zion, and turn away ungodliness from Jacob. So then, the righteousness of God is revealed in the gospel of Christ – in Jesus and His work.

The very fact the question was asked, shows that the audience of Romans expects the preeminence of ethnic Israel in God’s purpose. So the burden was on Paul to change our understanding of prophecy. Did he? On the contrary, our consistently literal (grammatical-historical) hermeneutic — which we hold on independent grounds, not addressed here — led to the conclusion that Israel as a nation will be restored to prominence in God’s program.

We began this study with the understanding that God’s sovereign control of reality is not limited by, nor does it preclude human free will. We submitted without argument, that this is biblical, and recommended that if we cannot reconcile the paradox without harming either truth, we should leave it as a paradox, and accept it on faith. Did Paul force us to conclude that God’s sovereignty or human free will is an illusion? Not at all. We even saw affirmations of both, without a suggestion of contradiction.

In fact, the subject of the passage isn’t even about God’s sovereignty over individuals, but His sovereignty over nations. (Romans 9 through 11 is eschatology, not soteriology.) God’s sovereignty on a national scale is trivially accepted by even the strongest orthodox Arminian. Since the supposed conflict only appears when looking at individuals, the truth is, a strong Calvinist, a strong Arminian, and any orthodox Christian in-between, could all accept (perhaps not all of the comments, but) the basic interpretation we have presented here. The disagreement over soteriology must be settled by philosophy and other scriptures.

Romans 9 through 11 does not need to be mysterious to the Christian. With prayer and diligent study, even this part of God’s word can be understood. Like all interpretation, context is key. Romans 1 through 8 lays out the Gospel over the theme of God’s righteousness, for Jew and Gentile alike; and in light of the condition of God’s special people, this naturally leads to the question about God’s trustworthiness. So Paul begins to answer that question in chapter 9, and finishes in chapter 11. The biggest error that students of this passage make is isolating chapter 9 from 10 and 11.

When we don’t commit this error, we see that the doctrine of election (as far as individuals go) is not found in Romans 9. Election to salvation is alluded to in the vessels of mercy, and later in chapter 11, but even here the emphasis is on nations, specifically that “true” Israel. Individual election is Biblical, of course, and it’s found elsewhere, including Romans 8, Ephesians 1, 1 Peter, 1 Thessalonians, and John 6, to name just a few places. The truths expressed in Romans 9 certainly find application to individuals, but as we’ve seen, the chapter is about forests, not trees.

Ironically, the lesson for individuals in Romans 9 is that election won’t save you. In other words, a person may be associated outwardly with an elect nation, but it won’t do any good without personal faith in the Messiah. Or put another way, national election doesn’t guarantee individual election.

In the past, you could point to Israel and say, “they are the people of God.” Of course, not all of them were true Israelites, because not all of them had Abraham’s faith (see Romans 4:12). This is what Paul says in 9:6-8. But now, consider how to identify the people of God in this age. It’s not by birth, or circumcision, or citizenship, but by a profession of faith. The outward sign of the people of God has changed from membership in the nation Israel, to a profession of faith in the Messiah. Of course, the inward, true identification never changed: faith in the promise of God. So, Paul’s audience is seeing an effect of the change from Old to New Testament. Since the vast majority of Israel did not have faith (9:32), when the outward sign changed, the visual effect was dramatic. When God placed Jesus in their midst, the stumbling stone caused the entire nation to stumble, save the remnant.

To explain all this, Paul had to first express his love for Israel, lest he be branded a traitor. Then he could explain something hard to hear: they never deserved their privileged position, it was only because of sovereign grace. The election Paul describes is Israel’s national election to a place of privilege, and he describes this to prove lineage does not make up for unbelief. In keeping with the theme of Romans, the righteousness of God and His mercy on Gentiles, this is all to show that God is justified in (partially, and temporarily) rejecting Israel. Chapter 11 shows that God removed them from privileged nation status to bring the gospel to the Gentiles, but God has also elected a remnant of Israel and one day, God will restore the nation itself to that privileged place. To accomplish the first shift in His program, the setting aside of Israel, God changed the outward sign of His people. This dramatically revealed how small the remnant was. When the prophecy of Romans 11:26 is fulfilled2, God won’t change the outward to accommodate Israel, He will change their hearts.

2For further study, see Zechariah 12, and everywhere in scripture the phrase, “the Day of the Lord” is referred to, for how and when Israel’s restoration will take place BACK