The Bible Project on the Day of the Lord

There is a popular animated video series called, the Bible Project. It seeks to summarize the Bible and biblical theology in short, easy to understand episodes. I love this idea! This could be a fantastic way to introduce the Bible to people unfamiliar with it, or to help explain some of the more difficult passages and concepts. Until recently I had not watched many of the episodes, but then I noticed they did an episode on “The Day of the Lord.” END_OF_DOCUMENT_TOKEN_TO_BE_REPLACED

Posted in Doctrine Study, Prophecy | Tagged interpretation, Prophecy, The Bible Project, The Day of the Lord, theology | Leave a comment

Possible consequences of misunderstanding the nature of the Kingdom of God:

Does the Bible imply that you should be a vegan? 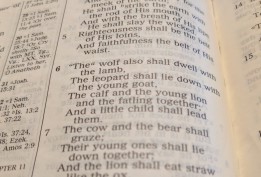 The Washington post recently published an article saying that Christians should all be vegans. The author was inspired by a recent announcement from a prominent evangelical celebrity who claimed he is doing so for health reasons. The article says, good for him, but he should also do it because, “The Bible is clear… Animals are meant to be our companions, not our food.” END_OF_DOCUMENT_TOKEN_TO_BE_REPLACED

This is the conclusion of a study of the Kingdom of Heaven by my friend Michael White. If you missed it, check out part 2.

This brings us to the Third and final rejection mentioned before during the previous phase of the kingdom. We will spend some time on it now. This rejection of the Kingdom by Israel happens after the resurrection. Some may struggle with the concept that the Kingdom is still offered to Israel up until Acts chapter 8. To help…

Wiersbe cites 11 reasons that the kingdom was still the primary focus after the resurrection for the first eight chapters of Acts. END_OF_DOCUMENT_TOKEN_TO_BE_REPLACED

This is part 2 of a series written by Michael White on the Kingdom of Heaven. See Part 1.

Jesus, in response to His rejection withdraws from the “house” of Israel and teaches “the crowds” in Matthew 13. He begins to teach in parables, saying “The Kingdom of Heaven is Like…” The disciples are astonished at this. Matthew 13:10 asking “Why do you speak to the people in parables.”  It is reasonable to understand their astonishment. John the Baptist had preached the message publicly in Matthew 3 and was astonished after he was thrown in prison even asking Jesus about his identity. Jesus himself had proclaimed it publicly in Matthew 4, and ultimately was astonished at Israel’s lack of faith Mark 6:1-6, Matthew 8:5-14. The Apostles had been told by The King Himself to proclaim the message publicly in Matthew 10 and been astonished at the Demons submission to this coming Kingdom. So after a very public proclamation “repent for the kingdom of heaven is at hand” and its accompanying miracles proving the validity of their message, they are now told that the message is to be concealed inside parables. END_OF_DOCUMENT_TOKEN_TO_BE_REPLACED

This is the first part of a study of the Kingdom of Heaven by my friend Michael White. The paper in its entirety can be downloaded here.

We are all familiar with the term, “kingdom of God,” but what does it mean? What is its nature? When we look at the world around us it’s easy to see that God’s “will…” is not always done “…on earth as it is in heaven” (Matthew 6:10). We are challenged as Christians “How could a good God allow such pain and suffering?” Moreover, there is within the Church significant disagreement concerning various doctrines and religious views, even those that represent blatantly heretical false teachings. If the Kingdom of God is truly among us today in 2016 (Luke 17:21), why aren’t all of our prayers answered the way we want, and why hasn’t Christianity triumphed as the dominant worldview?  Since our ability to share knowledge has increased so dramatically with new technologies, and with such an abundance of books and study materials available to us than at any time in human history, why do we see such a wide divergence of doctrinal views rather than a coming together in greater agreement? And what did Jesus mean in responding to a Pharisee’s question about the kingdom of God, when He said “nor will they say, ‘See here!’ or ‘See there!’ For indeed, the kingdom of God is within you (in your midst)” (Luke 17:21)?   Then In the very next verse, Jesus turns to his disciple’s and tells them to watch for signs that would precede the coming kingdom?   So which is it?   Is the Kingdom of God here now?  Then what did Jesus mean that it is still to come (Matthew 17:11)?  Is Jesus contradicting Himself in the very same passage?  END_OF_DOCUMENT_TOKEN_TO_BE_REPLACED

Five Terrible Objections to the Rapture

Some objections are principled, thoughtful, these are not.

“The word rapture isn’t in the Bible.” This objection is so bad it didn’t even make the list! The word is right here:

1 Thessalonians 4:16-17: “the Lord Himself will descend from heaven with a shout, with the voice of an archangel, and with the trumpet of God. And the dead in Christ will rise first. Then we who are alive and remain shall be caught up together with them in the clouds to meet the Lord in the air. And thus we shall always be with the Lord.” The Greek word that is translated “caught up” in English, is translated ‘raptura’ in Latin, which is where the English word ‘rapture’ comes from.

END_OF_DOCUMENT_TOKEN_TO_BE_REPLACED

In Defense of The Third Premise

This is in response to a friend’s critique of my argument for the existence of God.

Quote:
Whatever is changeable is changed in the act of changing another

Comment:
By this premise, in order to change something, one must change himself. This means the unchanged changer is either (A) an exception to the rule, whatever is changed must be changed by another, or (B) both the changer and not the changer at the same time.

If we are going to say a contradiction exists, or an exception to a rule exists, why this exception and not another? Or, why not admit to the many other contradictions we could imagine as solutions? We could assume that there is an entity that has both potentiality and actuality which caused everything. It would be an exception to the rule, but so is the proposed solution.

By the way, If I use the word ‘move’, it will be in the classical sense. I mean something more than locomotion. I mean change in general. END_OF_DOCUMENT_TOKEN_TO_BE_REPLACED

This is in response to a friend’s critique of my argument for the existence of God.

Comment:
If we end up agreeing that there would have to originally be an entity that caused everything to go from potentiality to actuality, it doesn’t mean that the uncaused cause created all potentiality. The argument hinges on the relationship between things transitioning between states, but doesn’t comment on potentiality itself. Since the goal of the argument is typically to show that an entity that not just caused the events to begin but caused everything to exist, the argument would fall short.

You claim that the goal of the argument is to establish an entity that caused everything to exist. (What do you mean by “typically”? Do you mean the goal of cosmological arguments is typically to establish the cause of the existence of all things?) The goal of this argument, for Aristotle, was to determine the cause, or explanation of all motion. The goal for Aquinas (according to some Thomists) was to establish the existence of a being worthy of the name God, or god. So, it is hardly a critique to say the argument establishes the existence of a being who is the cause of all change, but does not establish that this being also created all things. After all, it would be a strange sort of atheism to grant that a supernatural being exists who causes all change. END_OF_DOCUMENT_TOKEN_TO_BE_REPLACED

How is that God? Objections and Responses to the Argument From Change

I’ve compiled some objections and some brief responses to this argument for the existence of God. Some of these are specific to the argument, some apply to arguments in general. Please comment! Be sure to bring up any other objections, and feel free to pursue these questions deeper. I’d love to discuss this more!

Certainly, we could discuss each one of these topics in greater detail. I’ve briefly responded to these objections to hopefully clarify the argument, and to at least point in the direction of a possible rebuttal.  END_OF_DOCUMENT_TOKEN_TO_BE_REPLACED